I have been told by some brethren that following their third (or third degrees they were present at), Brothers representing the various appendant (or concordant) bodies inundate the new Master Mason with petitions and opportunities for more light. On more than one occasion, I heard or read a Brother saying that it was best to wait at least a year to join one of those higher orders. They said it was important to spend time learning and really understanding the Blue Lodge degrees. I couldn’t agree more.

Unfortunately or fortunately, I did not receive such advice following my raising, nor was I inundated with petitions. I knew from the beginning that I wanted to join the Scottish Rite, and I was going to do so as soon as I was able to. I was intrigued by what I had read about Albert Pike and the various degrees of the Scottish Rite (I now understand that it was the Southern Jurisdiction degrees and I had I been in the Northern Jurisdiction, I likely would have been confused). So, when a Brother who has been like a mentor to me invited me to join, I jumped at the opportunity.

He told me that my enthusiasm had inspired him to delve deeper into Freemasonry. He was now reinvigorated after a period of dormancy. I didn’t realize that it was I who inspired him, as I saw in him a mentor for myself. I realize now that the mentor-mentee relationship is mutual one with learning happening on both sides. When I was mentor in grad school to new students, I thought it was my duty to guide them and know what it was they needed to know to get by. I didn’t think or realize that I would learn something from them that would help me in my journey. Now I wish I could go back and change some things.

As I wrote before, I was raised to the sublime degree of Master Mason in the last week of February 2015, and I learned sometime later that the next Scottish Rite Reunion in Pasadena would be in May. The Valley of Pasadena’s Reunion happens across two weekends (Friday nights and Saturday morning to later afternoon). There are other Valleys in the area, but from what I understand, they do not stretch the Reunion out as long, and I didn’t know anyone who belonged to them anyway. My mentor belonged to the Valley of Pasadena, as did his mentor before him.

On May 8, 2015, my mentor and I drove from Claremont to Pasadena. We were rather early, anticipating traffic, so we decided to Islands for a drink and conversation. He is a fascinating man, having been a DeMolay in his youth. He told me that his father actually joined Freemasonry, because he had become a DeMolay. I found that an interesting parallel to my own journey with my son joining DeMolay and I believing I needed to become a Mason for him to join. His father became very involved with DeMolay over the years. In fact, the Chapter Dad for my son’s DeMolay chapter knew my mentor’s father from when he was a DeMolay in his youth.

I hadn’t been very involved in DeMolay since my son joined. I attend some of his meetings and events. I help him with learning his ritual. I drive him where he needs to go, including the Pasadena Scottish Rite Cathedral to see his second degree exemplified on the stage. Other than that, I have not really been involved. I realize now that parental involvement is extremely important for the chapter and the relationship, so I’m going to be more involved.

After drinks, we arrived to the cathedral and separated into tables of candidates and attendees. I met my Reunion classmates and instantly connected with a few. Two of the Brothers were from a lodge in my district, and we had met briefly at OSI (Officer School of Instruction) previously. I also discovered that the Venerable Master and Secretary of this Valley was a Past Master of my lodge. After the dinner, we adjourned to the classroom, where we met our instructor. We immediately knew we were going to be learning something, as he opened up his various books and began discussing the 4th degree. He is very knowledgeable, entertaining and answering the various questions we had. Those he could not answer immediately, he sought out the answers to inform us later on. 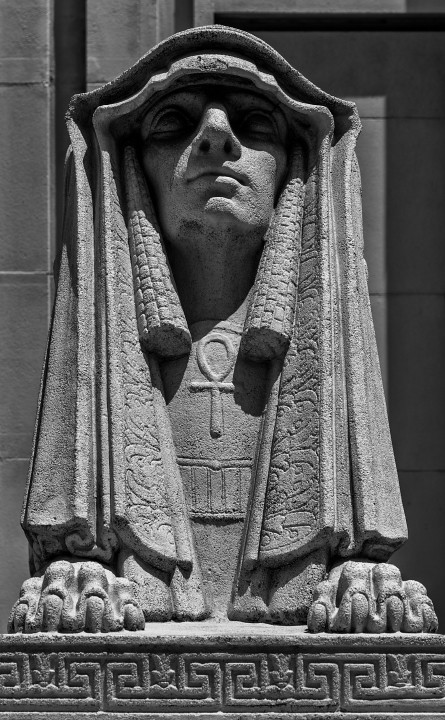 After we learned about the 4th degree and were obligated, one of our Brothers (later elected president of the class) was led out of the room. The rest of us were led to seats in the theater. The last time I had been in this room, I had seen the performance of the 2nd degree of DeMolay exemplified upon the stage by young DeMolay brothers. This time, I was here to see the Scottish Rite degrees exemplified by 32° and above Master Masons. I wasn’t exactly sure what to expect, but the use of make-up and costumes, upped-the-ante on the pageantry and theatricality, and definitely made the performances memorable. If only for that moment following them, as we were bombarded with so much information over the course of the weekend that my brain felt like it was going to explode.

After the performance of the 4th, we returned to the instruction room and learned about the 5th degree. Then, we returned to the theater to see its performance. Unfortunately, not all the degrees were able to be performed at the Pasadena Valley. They do have all the necessary costumes and stage tools to perform them, but to do so requires so much time. My mentor has previously told me about the Scottish Rite in Guthrie, Oklahoma, where the all the degrees are exemplified over a three day weekend. I told some of my Reunion Brethren about it and we had all expressed interest in attending the next one. I hope that happens, as I know I will learn more each time I see them performed.

After the 5th degree was over, we returned home around 11pm, and then we came back the next morning at 730am for breakfast. The next part was rather grueling, as the next nine degrees were communicated and obligated upon in the classroom. There was so much information coming in, I almost couldn’t remember what I had eaten for breakfast let alone what I was supposed to know for each degree. The instructor informed us that we should consider signing up for the Master Craftsman I and getting DeHoyos’ Ritual Monitor & Guide with it for a much lower price than buying it alone. He also said, he didn’t get any commission on the book. As many of us bought the book following his recommendation, I think that should be rectified 😉

We broke for lunch, and then afterwards, the next four degrees and obligations were communicated to us. The 18th degree, the final degree of the Chapter of Rose Croix, was the next degree exemplified on the stage and the last one for that day. I had the pleasure of being the Candidate for this degree. While I stood outside the door waiting to enter, the Brother who stood with me told me that the Master of this degree was amazing in his performance. When I got on stage, I discovered the Master of this degree was my mentor’s mentor, and a senior member of my lodge. He later told me that he was just as surprised to see me on stage. I thought it was him who had requested me to be the candidate, but perhaps it was my mentor or the Venerable Master.

The 18th degree was the longest one yet, full of rollercoaster-like emotional impact. I found myself relating to it greatly, as it seemed to communicate well that which was lately weighing heavy on my heart. Of all the degrees, I had witnessed so far, this was the most thought-provoking for me. It could’ve been due to my involvement in it, but I think even watching from the audience, I would have been just as attuned to the message, if not more so by virtue of watching rather than performing. After the performance of this degree, we returned to the classroom and as many of the next degrees that could be communicated in the time allotted were done so.

When I left on this second night of my Reunion, I was a member of two of the Scottish Rite bodies: Lodge of Perfection and Chapter of Rose Croix.

To be concluded next week…