Topic of Masonic Interest: The Druze

On Monday night, I attended bro. Timothy Hogan’s invited lecture for the South Pasadena Masonic Lodge Illumination series. He gave an excellent talk on the sacred architecture and secret symbolism of the great European cathedrals. One thing he said caught my attention, however, and made my brain go wild. He mentioned the Druze, their reverence for Hermes Trismegistus and Pythagorus, their emblazoned star, and their initatic system that included a handshake with a special grip. I had first heard of the Druze before when I attended the Pasadena Scottish Rite discussion group on the 25th degree. It seems that Albert Pike originally wrote this degree with the Druze representing the mystical tradition of Islam rather than the Sufi. It has since been reworked to correct that mistake. After leaving Bro. Hogan’s talk, I couldn’t help but keep wondering, “Who are these Druze, what do they do, and how do they relate to Freemasonry?”

After a quick Google search I found two interesting blogposts on the Druze and their relationship with Freemasonry. The first is from Bro. Cliff Porter’s blog and the second is from a past contributor to my blog, Bro. Barry Newell’s blog.

Brother Porter, who traveled with Brother Hogan to Lebanon and met with Druze adherents, indicates pointedly and perhaps whimsically that the Druze see their religion as Freemasonry in many ways. They are a secret society one is born into, They have “grips, hollow columns, reverence of Pythagoras, reverence of Hebraic mystical traditions, circumambulation” and many more Freemasonry-related elements.

It is interesting that the Druze degree was removed by the Scottish Rite for the Sufi degree because it was determined Pike was mistaken.  I wonder if someone didn’t jump the gun.  Because the Druze themselves would claim him correct.  This I heard from the mouth of Druze, not from the mouth of experts who claim to know them.

Bro. Newell gives a wonderful description of the Druze, which I will distill here (read his post for a more thorough reading). The Druze are a “separatist” branch of Shia Islam from the 11th century, “which combines aspects of the Abrahamic religions, Gnosticism, Neo-Platonism, and other philosophies.” Though they have some similarities to Islam, they do have fundamental differences. They are strict monotheists or Unitarians, believing attributes placed on God by humankind is inherently polytheistic. To them, God is incomprehensible, but God communicates with humans through Tajalli (theophany or revelation), experiencing the Light of God once advanced spirituality is achieved. They have sacred books that are read in three layers: zahir (exoteric), batin (esoteric), and anagoge (hidden), which seems reminiscent of PRDS in Kabbalah. They follow seven precepts:

Veracity in speech and the truthfulness of the tongue.
Protection and mutual aid to the brethren in faith.
Renunciation of all forms of former worship (specifically, invalid creeds) and false belief.
Repudiation of the Devil, and all forces of evil (or despotism).
Confession of God’s unity.
Acquiescence in God’s acts no matter what they are.
Absolute submission and resignation to God’s divine will in both secret and public. To get to know a little more about the Druze, I used my access to academic research databases and found two very interesting papers. The first is a case study on the Druze by Yusri Hazran (2012) and the second is a transcription of a 19th century Druze catechism by E. Toftbek (1954).

Hazran’s (2012) paper describes Islamic attitudes toward the Druze, which is interesting from a social psychological perspective. The Druze are the black sheep of the Islamic family it seems, because they include other elements into their Islamic beliefs, like non-Islamic philosophies. Because of this, they were deemed greater infidels than Jews, Christians, and pagans by a 14th century Islamic scholar, and often referred to as heretics by other Muslims. They are called hypocrites that do not deserve repentance and must be killed, because they look like Muslims outside, but are heretical inside. This applied to the men, as the women and children were just sentenced to enslavement. This continued to the 17th century and the idea of it still exists today within Islam.

In the 20th century, attitudes toward the Druze showed more inclusiveness, accepting them as a part of the Islamic community, even as they were a heterodox element (Hazran, 2012). Modern Islamic scholars tend to be more critical of the “true orthodoxy” and the dichotomy between the Shia and Sunni sects, indicating that they are all Islam and the TRUE source of orthodoxy is the Qur’an and not their interpretations. This was an attempt to adjust to modernity, utilizing academic perspectives on Islam. Further, to allow heterodox groups like the Druze with their beliefs in reincarnation and repugnance of the five pillars to still be within the umbrella of Islam, three articles of faith were expressed: “The principle of monotheism, the prophetic mission of Muhammad, and the divine origin of the Qur’anic text.” As the Druze believed these three principles, they could be included. And so we find the Druze described as faithful Muslims in 1959, although “no Islamic judicial authority, whether Sunni or Shi’i, has formally recognized the Druzes as part of Islam in the modern period” (p. 234).

Whether the Druze are included or excluded within Islam today depends on the Islamic leaderships’ interpretations (Hazran, 2012). The fundamentalist Muslims continue to identify the Druze as infidels, while the more modernistic Muslims seem more accepting. Those who wish to exclude them show the ties between the Druze and Israel, which they see as hostility toward Islam. Either way, and similarly to Freemasonry, their secrecy has led to conspiratorial beliefs by those around them, and because a main tenet of the Druze faith is the “obligation to be faithful to any ruling government” similar to Freemasonry’s obligation against treason. So, we find that even in the 1980s, fundamentalists accused the Druze of conspiring against Islam with Christians, Jews, and other heterodox Muslims. The fundamentalists identify the Druze history as replete with conspiracies against Islam, as they avoided fighting crusaders, supported opposition in battles and wars, and helped Napoleon conquer Acre.

The Druze, however, see themselves as a part of Islam, helping in the struggle for Islam’s survival, and proudly claiming Arabic descent (Hazran, 2012). Even so, they do not wish to lose their Druze identity. They maintain their own judicial systems within the parameters of state law, and they continue to practice their rituals and traditions without change. They seek to modernize Islam, allowing for a more flexible and inclusive approach to the diverse and minority viewpoints within the group. They seek to remain independent, but a part of the whole.

Now for something really interesting for us Masons, selections from the Druze catechism from the end of the 19th century. I cannot print it in full as it would violate copyright, but if you are interested, you can purchase or obtain it from the publisher link above, or go to this link.

Q. What is incumbent upon you?
A. Speaking the truth; worship of al-Hakim, and the rest of the seven conditions.

Q. How do you know that you are a Unitarian Druze?
A. By eating lawful (things) and leaving unlawful (on one side).

Q. What things are lawful and what unlawful?
A. Lawful things are the property of the learned and the peasants; unlawful the wealth of Governors and perverts.

Q. Why are all the books disowned except the Qur’an in the presence of anyone making enquiries?
A. Know that we must rely upon the faith of Islam, so we admit the book of Muhammad; and there is no unsoundness in us for that accordingly; and funereal prayers for the dead are in accord with this reliance and for nothing else. Indeed the purity of the cult demands it.

Q. When were the souls of all mankind created?
A. They were created after the creation of the Intelligence, who is Hamza ibn Ali; then all the spirits were created from his light; and they are limited, without increase or decrease throughout all time.

Q. How do we recognize our Unitarian Brother, when we see him or he passes us by in the road, saying that he is one of us?
A. After meeting him and conversation with him and greeting, we say to him, “Are there peasants in your country who plant the Myrobalan tree?” and if he says, “Yes, it is planted in the hearts of the believers,” then we ask him about his knowledge of the definitions; and if he replies,—all right! and otherwise, he is a stranger!

Q. What is the point of the compass?
A. It is Hamza ibn All.

Q. What is the straight path?
A. It is Hamza ibn Alï; he is the upholder of the truth; the leader of (all) time; he is mind and pre-existence; the noble prophet and he is the cause of all causes.

Q. What are the three precepts which are unsearched for and unrevealed save in olden time—the time of Hamza?
A. They are the Wish and the Will and the Word; they are John and Mark and Matthew in the cycle of Christ; and they are Miqdar and Daun ibn Basha and Yarïd al-‘Anadï—and in the cycle of Hamza Ismä‘11 and Muhammad the Word and Bahä’al-Din.

Q. What are the buildings in Egypt called Pyramids, vested with knowledge?
A. They are the Pyramids which our Lord erected through the wisdom of his will.

Q. What is the wisdom in it?
A. It is for the purpose of arguments and the covenant, which our Lord received from the learned (?), so that he described them there and is preserving them till the day of his second coming. 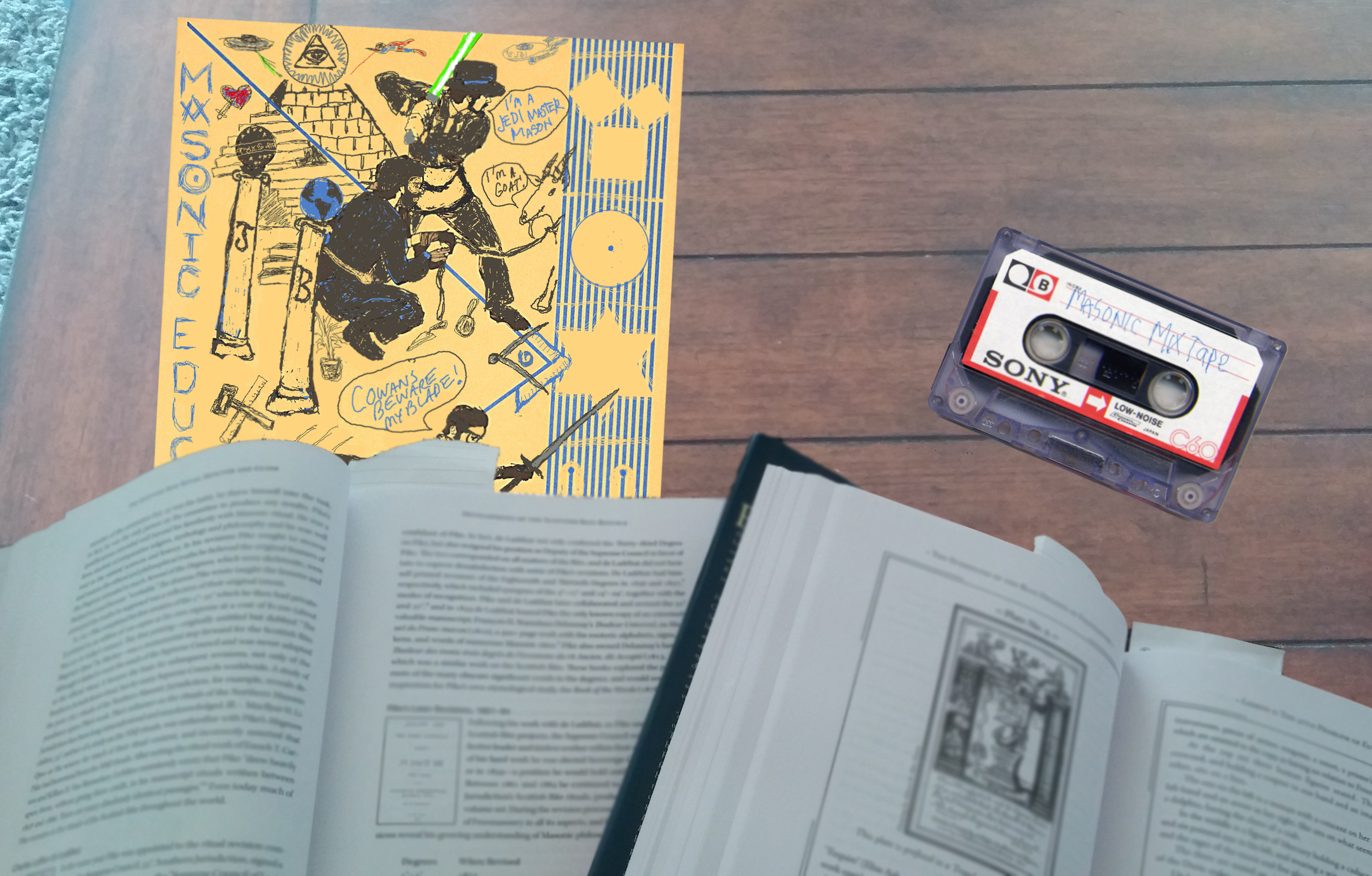