I welcome February with open arms, ready to conquer, rise, and rebuild myself. I feel this is very much in line with Grand Master of California Freemasons, MW M. David Perry’s theme for this year, “Rise and Build.” It is and inspiring and positive message. I heard him speak at one of the three installations I was involved with in January. I served as honor guard with several other Knights of St. Andrew for the Valley of Pasadena, as he served as the Installing Master for our Scottish Rite Valley. 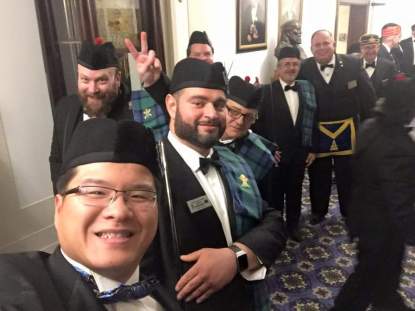 As I described in my previous post this month, I had a super busy month, but the two weeks from the 18th to 30th were by far the busiest. On Monday, January 18th, I was installed as Junior Deacon of the Southern California Research Lodge now meeting in South Pasadena. On Wednesday, January 20th, we had our first meeting of the Claremont Masonic Business Association, for which I am a newly elected member serving for the next three years. On Thursday, January 21st, I drove one of my mentors in my lodge and Scottish Rite to the Pasadena Cathedral, as we are both acting in the revitalization of the dramatic production of the Masonic 3rd degree called “The Spirit of Hiram.” It is a tiled play, open to Master Masons only.

The very next day, I returned to the Pasadena Cathedral again to serve as honor guard. My trips to Pasadena did not end their, however, as the Knights of St. Andrew stated meeting was the following morning. We had elections and squired three new brothers. Directly after the stated meeting, I led the planning meeting for the new Master Craftsman Study Group. 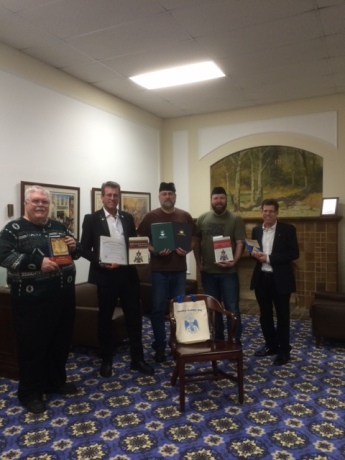 After all those Masonic activities, I spent Sunday with family going to Medieval Times.

Then, there were a few days off before another Spirit of Hiram rehearsal on Wednesday, January 27th. This time, we were practicing on the stage we will be performing on this March 11th. It is good to be back on that stage. I’m starting to feel comfortable, which is not something I have felt in a very long time. The next day, we had installation practice at the Claremont Masonic Lodge, and that Saturday, I was installed as Senior Steward of my home lodge. This is my first actual, factual installed position at my lodge, although I have sat in several officer seats over the last year.

Later that evening, I was able to wind down a little bit, as my wife’s company had a party. There were some good snacks and drinks, but most importantly, there was a puppet show… well, marionettes. My wife works at Gymboree Play & Music. So, it is no surprise that they would have something like that. However, there was certainly as surprise for all of us who did not realize that the show was adult oriented until we were sitting in the audience. I haven’t seen so many provocative marionettes since Team America: World Police. If you are ever in need of a show like this, please do not hesitate to contact Franklin Haynes. It was absolutely worth it!